Does Taking Effexor Cause Weight Gain?

Taking Effexor may cause weight gain in some patients. Weight gain is a common side effect of Effexor and other antidepressant medications, and more than half of patients on newer classes of antidepressants report experiencing weight gain.

People who are struggling with symptoms of common mental health conditions like depression or anxiety may be interested in seeking help for their condition.

However, they may be concerned about side effects reported with some of these drugs.

Antidepressant medications are commonly associated with weight gain regardless of which drug class they belong to, and weight gain is a significant concern for many patients.

Other examples of SNRIs include duloxetine (Cymbalta) and atomoxetine (Strattera).

Effexor is a popular brand name SNRI that is commonly prescribed by healthcare professionals for the treatment of depression and anxiety symptoms, but does taking Effexor cause weight gain?

Effexor is a brand-name prescription drug that is also available under the generic name, venlafaxine.

Effexor is available in both immediate-release and extended-release formulas; the extended release version of the drug is called Effexor XR.

The medication was first approved by the U.S. Food and Drug Administration (FDA) in 1993 for the treatment of major depressive disorder, which is sometimes referred to as clinical depression. 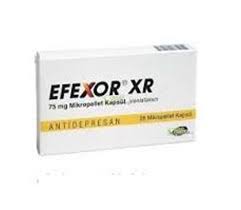 Effexor is available by prescription only and belongs to a class of drugs called serotonin norepinephrine reuptake inhibitors (SNRIs), which are a relatively new class of antidepressants that are commonly used to treat mental health conditions such as depression and anxiety.

What is Effexor used to treat?

Effexor can also be prescribed for the treatment of social anxiety disorder and depression associated with bipolar disorder.

The drug works by acting on the reuptake of serotonin and norepinephrine in the brain, which helps to increase the levels of these important neurotransmitters.

When the balance of serotonin and norepinephrine stabilizes in the brain, patients commonly experience improved mood and reduced symptoms.

Treatment Options for Depression, Anxiety, and Other Mental Health Ailments

Does taking Effexor cause weight gain?

Antidepressants have a bad reputation when it comes to causing weight gain, and unfortunately, Effexor is no exception.

Clinical trials have shown that Effexor is commonly associated with weight gain.

In one study, more than 55 percent of patients using newer antidepressants, including Effexor, gained weight over the course of treatment that lasted between 6 and 36 months.

More than 40 percent of the study participants gained at least 7 percent or more weight compared to their baseline.

The study found that Effexor and other antidepressant drugs were associated with significant weight gain.

Other studies have reported finding similar results, with the majority of SSRIs and SNRIs associated with body weight gain as a common side effect.

This may be caused by an increase in cravings for carbohydrate-rich foods and a slight increase in appetite that adds weight over time. It does not significantly affect blood sugar levels.

Effexor can also cause a drastic decrease in appetite, leading to unhealthy weight loss.

What side effects are associated with Effexor?

In addition to causing potential weight gain, Effexor is also associated with a number of other common and less common side effects.

Common side effects associated with Effexor include:

Effexor is also associated with side effects that are less common but are potentially serious.

If you experience any of the following uncommon but potentially serious side effects, you should seek medical attention right away:

Like other antidepressants, Effexor is commonly associated with weight gain.

More than 50 percent of patients taking antidepressants like Effexor report weight gain while taking their medication.

Other side effects associated with Effexor commonly include drowsiness, dizziness, nausea, and vomiting. Seek medical advice to see if Effexor is right for you.

Patients who are taking Effexor can save on the cost of their prescription drugs by using a pharmacy discount card from Pharmacists.org.