The States That Lie to Their Doctor the Most Have you ever lied to your doctor? If your answer is yes, don’t worry, you’re not alone. Let’s explore the nature of fudging the truth when patients talk to their doctor. 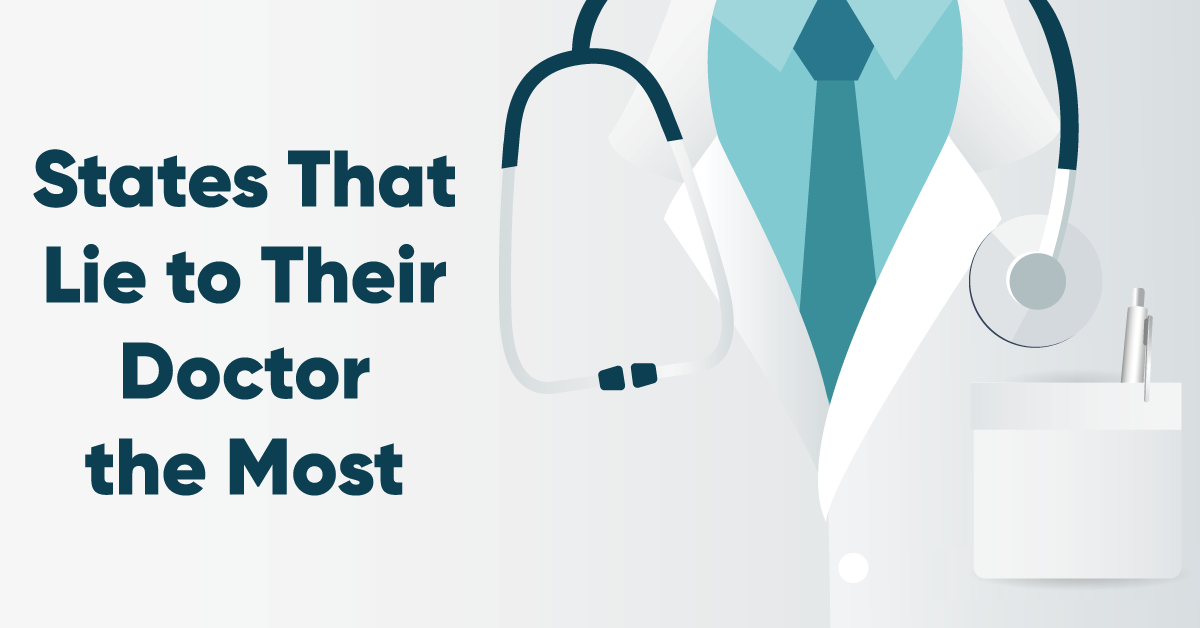 “What brings you in today?” “Do you smoke?” “How many beers do you typically have in a week?” Collecting a patient’s basic medical history is a normal part of your routine visit, and feeling ashamed to discuss these topics is also normal. But our discomfort with these types of questions can make it easy for little white lies to slip out of our mouths.

So, have you ever lied to your doctor? If your answer is yes, don’t worry, you’re not alone. Even though honesty is the best policy—for some patients, it’s hard to abide by. Let’s explore the nature of fudging the truth and the trust (or mistrust) in the doctor-patient relationship.

To find out how often patients lie to their medical providers, we ran two surveys asking people to rate how frequently they lie to their doctor on a scale of 1 to 5, 1 being never and 5 being very often. All those answers were averaged together to find out what states are the most and least likely to lie.

In all, we had over 3,000 people respond to our surveys. Respondents answered how comfortable they are talking to their doctor about certain topics, what they lie about most often, and the main reasons why they lie. Read on to learn how your state answers questions at their doctor’s appointments!

How Much Every State Lies to Their Doctor

ALT: A U.S. map displaying how often every state lies to their doctor

ALT: A chart showing states most and least likely to lie to their doctor

The difference margins were so tight in terms of how truthful Americans are with their doctors that we had to create a tiebreaker to find the states most and least likely to lie. Ties were broken by looking at the percentage of respondents in each state who reported ever having lied to their doctor before.

As mentioned above, South Carolina is the state that is most likely to lie to its doctors. Other southern states that show up here include Mississippi, Florida, and Georgia. One surprise in the top 10 might be Hawaii, which came in second with an average answer of 2.18 out of 5. Each of the top 10 states that lie to their doctor most often had average answers above 2 out of 5, which means while they may not make a habit of lying to their medical professionals, they certainly will when they feel they need to.

While there isn’t much difference between the states in how frequently patients lie to their doctors, you can see it does happen when you consider that even in the most truthful state, 58% of people said they have lied to their doctor before. But what makes us lie to our doctors? Let’s take a closer look at doctor-patient relationships to find out.

ALT: A series of charts showing what Americans most often lie to their doctor about

Think back to your last doctor’s appointment. How do you feel about your interaction? Would you say you trust your medical provider? 87% of Americans trust their doctor, but only 12% enjoy making the trip.

Almost half of Americans have never lied to their doctor. But when they do, the most-lied-about topic is mental health, with 27.4% saying they have lied about it to a physician before.

What else are people lying about? The survey found:

Of course, these topics can be hard to open up about. Talking about certain subjects, like how many sexual partners you’ve had in the past year or how many glasses of wine you drink weekly can be uncomfortable. But the alternative to not telling the truth—an inaccurate diagnosis and potential health complications—is far more concerning.

Who are the most comfortable talkers? Older generations.

To dive into generational influences more, consider the following: what factors would someone feel uncomfortable with? For instance, it’s common for parents to accompany their children to their doctor’s appointments. 44.66% of Generation Z says having someone else in the room (parent/significant other) has caused them to lie to a doctor before, only 7.14% of baby boomers say the same thing.

Why Americans Lie to Their Doctor

ALT: A group of charts showing the most common reasons Americans lie to their doctor

The doctor’s office isn’t everyone’s favorite trip. 41.83% of Americans do not like going to the doctor. Part of the reason people may not like going is due to the uncomfortable questions we get asked and conversations we need to have. Being embarrassed to talk about your diet, exercise habits, or sexual activity can cause a doctor’s appointment to be pretty stressful.

One way to relieve that stress is by telling the doctor what we think they want to hear, so it should come as no surprise that the most common reason Americans lie to their doctors is simply embarrassment. Other common causes for withholding information are fear of judgment (33.8%) and avoiding a lecture on the importance of your health (32.5%).

There was virtually no difference between how often men and women tend to lie to their doctor, but the reasons why those lies are told is a different story. 37% of women say a previous experience with a physician has impacted how honest they are with their doctors, compared to 20% of men who felt the same way. That tells us that while shame is a driving force behind many of the lies we tell our doctors, trust is a two-way street. If patients don’t feel like they’re being heard, they may not see the value in being honest with their physicians.

To round out the survey, we asked Americans which doctors they are most likely to be dishonest with. Over half (53.9%) of respondents said they’re least honest with their general practitioner, followed by dentists (14%) and therapists (12.4%).

Until you have a comfortable, honest relationship with your physician you won’t be getting everything you can out of your doctor’s visits, which is a shame when you consider the rising costs of healthcare for millions of Americans.

At Pharmacists.org, we believe that transparency and trust are two linked principles that are of vital importance in the health and medical industry. If you’re one of the hundreds of millions of Americans who want to spend less money on their medications, search our marketplace to find coupons and special offers for your prescriptions today. Surveying Americans: Items You Have to Pay for but Should Be Free

Shouldn’t vaccinations, ambulance rides, and diapers be free? We surveyed 1,000+ Americans to uncover which of life’s necessities we should not have to pay for. We’ve surveyed over 1,000 people to get their takes on this latest political controversy surrounding the pandemic. Respondents were asked if they were for or against the concept of vaccine passports; reflected on some ethical issues that might arise when they are rolled out; and discussed reasons why they may or may not get vaccinated in general. We’ve used variables such as age and political affiliation to help flesh out and expand on the findings. Read on to find out more! Surveying Americans: Items You Have to Pay for but Should Be Free

Shouldn’t vaccinations, ambulance rides, and diapers be free? We surveyed 1,000+ Americans to uncover which of life’s necessities we should not have to pay Let’s take a closer look at how many Americans report using different drugs (including marijuana, LSD, ketamine, and PCP); which drugs they support either

We’ve surveyed over 1,000 people to get their takes on this latest political controversy surrounding the pandemic. Respondents were asked if they were for